Half cows, entire pigs: Families are buying meat in bulk to save money 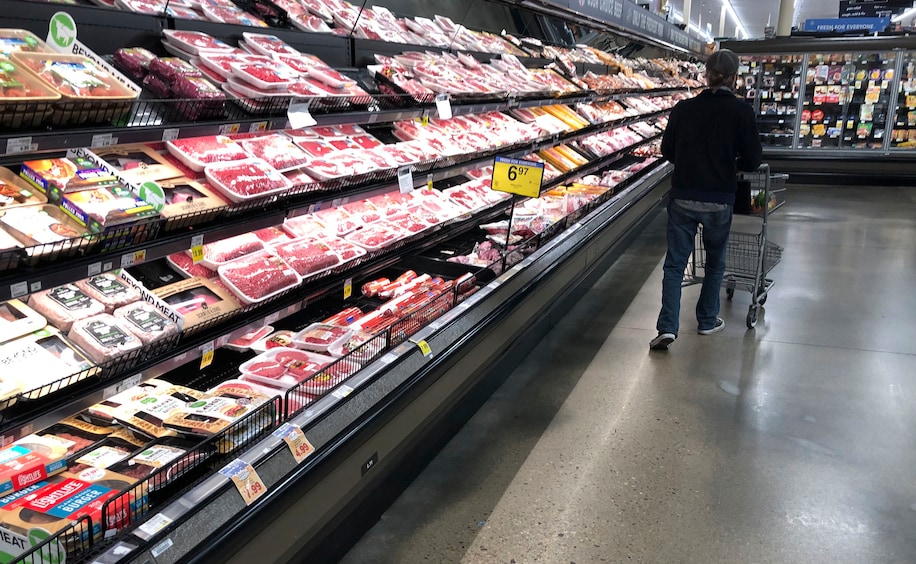 Rising meat prices -— up 11 percent from last year -— are leading many to change purchasing and consumption habits.

It was the $200 weekly grocery bills that finally did him in. With three young kids and soaring meat costs, Logan Wagoner decided it was time to go whole hog.

This spring, the St. Louis attorney bought half a cow and an entire pig — plus a freezer that now holds 320 pounds of bacon, sausages, rib-eye steaks, ground beef and soup bones in his basement. Inflation has been at or near 40-year highs since the spring, but families have been pinched by higher food prices for two years. Meat prices in particular have surged 17 percent since July 2020, spurring families around the country to change their purchasing patterns and eating habits.

More than 70 percent of Americans have adjusted how they buy meat because of inflation, according to Glynn Tonsor, an agricultural economics professor at Kansas State University who oversees the school’s Meat Demand Monitor, which surveys 2,000 people nationwide about their meat consumption and purchasing habits.

Many are buying less meat or trading down to cheaper cuts — ham instead of pork chops, for example, said Tonsor.

But some, like Wagoner, are taking a more extreme approach: buying entire animals and stashing them in the freezer as a way to save money.

“With prices getting higher at the meat counter, there’s definitely been more direct interest from consumers,” said Jess Peterson, senior policy adviser for the U.S. Cattlemen’s Association and a cattle rancher in southeast Montana. “Our price points are still less than what someone would pay at the store.”

Food prices are still rising. Here’s how Americans are coping.

Meat prices have continued to rise even as other costs have come down. Overall meat and poultry prices have risen 11 percent from a year ago, while the cost of chicken has gone up nearly 18 percent, according to the latest data from the U.S. Bureau of Labor Statistics. Bacon costs 12 percent more than it did last summer. The number of Americans buying meat directly from farms in bulk, though still low, is higher than it was before the pandemic, said Tonsor of Kansas State. Early covid-related shutdowns and shortages prompted many Americans to look for more direct, local sources of meat. But more recently, sticker shock at the supermarket is prompting a specific type of family — with the money and space needed — to buy and store hundreds of pounds of beef, pork or chicken at once. In interviews, cattle farmers across the country said they were fielding more requests for direct orders. Some were reconfiguring their businesses altogether to accommodate half- and quarter-cow purchases.

“People are looking for more of a deal now,” said Dana Carey, owner of Circle Bar Beef in Fort Bidwell, Calif. “They’re less concerned about where the meat comes from and more worried about whether they can afford to get it on the table.”

Most of the cows from Carey’s family ranch are sent to pastures or sold to feed lots and eventually make their way to grocery stores across the country. Early in the pandemic, though, she realized people were looking to get their meat locally, from sustainable sources. She found a nearby meat processor and began selling beef directly to consumers.

But lately, interest has been through the roof for a different reason: Everyone wants cheap beef.

To that end, Carey has begun mailing 20-pound beef boxes to customers around the country. Sales began spiking about eight months ago, she said, just as fuel prices began their ascent.

Even in the face of surging grocery prices, retail beef and pork prices cause sticker shock

At Wilson Dowell Farms in Calvert County, Md., demand for half and whole cows has been so brisk among customers in the Washington, D.C., suburbs that owner Jason Leavitt is already sold out for the year. He specializes in grass-fed beef and has had to raise prices by $2 a pound to keep up with a sevenfold increase in grass seed prices.

Even so, he says many customers tell him buying direct has become cheaper than picking up meat at the grocery store. He charges $10 a pound for a quarter cow, though the price per pound drops to $9.50 for a half cow and $9 for a whole one. “There’s all this inflation talk, and I think a lot of people are just stocking up at this point because of higher prices and shortages,” said Leavitt, who also has a day job at the county’s department of public works. “There’s a certain comfort level in knowing you have a freezer full of beef.”

The freezer itself, which can cost several hundred dollars and takes up a good chunk of space and electricity, is one of the biggest hurdles to buying large slabs of meat, said Tonsor. And buying a year’s worth of beef, pork or poultry in one go often involves hundreds, if not thousands, of dollars. There are other reasons such transactions can be impractical, too.

“This doesn’t work for a lot of people because they don’t like all the cuts, or they don’t know how to cook all the cuts,” Tonsor said. “Or maybe they’re a single person who’s got no use for 200 pounds of meat.”

In Montrose, Colo., Katherine and Adam Egloff recently decided 185 pounds of beef was just right for their family of three. The couple, who own a Jimmy John’s franchise, have seen firsthand just how scarce and expensive meat has become: Deliveries of sliced turkey and cured meats like capicola at their sandwich shop have been spotty for months.

This summer, they bought a quarter cow for $600, and they now have T-bone steaks, rump roasts, stew meat and one cow liver in a chest freezer in their garage.

“Grass-fed beef has been getting so expensive that it was like, ‘Why am I spending so much at the store when I can just stock up?’” said Katherine, 37. “We are definitely saving money. And if store shelves are ever empty, we know we’ve got six months of beef in the freezer.”

The meat that is sold directly to consumers takes a straighter and cheaper path than the beef that ends up on grocery store shelves. Much of that cattle originates on family-owned ranches, then is sold to feed lots where they are fattened up before being sold to a meat processor. Four major meatpackers — Cargill, JBS, Tyson Foods and National Beef Packing — process roughly 85 percent of beef from U.S. feed lots.

That arrangement, industry experts and agriculture economists say, creates a monopoly-like environment, which can work to keep prices higher. Although meat processors are reporting record profits, the amount of money flowing back to ranchers has fallen over the past half century. Ranchers currently receive 39 cents of each dollar consumers spend on beef, compared with 67 cents on the dollar 50 years ago, according to monthly data from the U.S. Department of Agriculture.

“There is a big difference between what consumers pay and what ranchers receive,” said Claire Kelloway, who manages the food and agriculture systems program at the Open Markets Institute, a nonprofit that advocates against monopolies. “You have the price of beef skyrocketing to record levels, and yet the price ranchers receive has gone down. The processors, though, have gained astronomical profits.”

Sarah Little, a spokeswoman for the North American Meat Institute, an industry lobby group, said a number of other factors, such as a shortage of cattle and rising costs for labor, transportation and energy, have driven up prices.

Glenn Bloom, a computer specialist in Oklahoma City, says higher grocery prices also prompted him and his wife, Ana, to buy a quarter cow from a nearby farm. The couple ordered a chest freezer for their laundry room and paid $875 for 175 pounds of grass-fed Black Angus beef that will arrive next month.

“Now instead of $15 a pound for rib-eye steaks, it’ll be $5 a pound,” said Glenn, 61. “This way we don’t have to worry about the price going up or availability going down. It just made perfect sense for us.”

FROM SPRING 2022 ISSUE OF 5TH & MAIN MAGAZINE, A LOUISIANA ASSOCIATION OF BUSINESS AND INDUSTRY...