From the LSU Office of Research & Economic Development:

BATON ROUGE—April 6, 2022—Through a new skills-based and stackable certificate program—Sustaining Future Farms in Louisiana—and a brand-new Associate of Science in Agriculture degree, LSU Eunice (LSUE) will produce the next generation of technologically advanced farmers.

“At LSUE, the ‘A’ in STEAM stands for agriculture, not arts,” said John Hamlin, vice chancellor of academic affairs at LSUE. “Louisiana has an aging and declining farming population, but by collaborating more closely with the LSU College of Agriculture and AgCenter in Baton Rouge, our mission is to sustain farming for future generations, and teach our students modern farming technology.”

With $846,000 in support from the Delta Regional Authority—the largest grant LSUE has received in recent years—students will be able to take a free Introduction to Agriculture class and combine it with skills-based training in one of four areas: beginner cattleman, master farmer, crop analyst, or FAA drone certification, in combination with a business management certification.

“We need labor on all levels, from ranchers to butchers to sales. I wish LSU’s new program existed when I was coming out of the Marine Corps, because I probably would have done it.”—Chip Perrin, co-founder of Coastal Plains Meat Company and U.S. Marine Corps veteran

LSUE is located in the heart of rice and crawfish country, but the area is also home to the largest pasture-to-plate beef cattle processor in the state, Coastal Plains Meat Company. Veteran-owned, the company hopes to soon host LSUE interns and hire graduates.

“We need labor on all levels, from ranchers to butchers to sales,” said Chip Perrin, co-founder of Coastal Plains and a U.S. Marine Corps veteran. “I wish LSU’s new program existed when I was coming out of the Marine Corps, because I probably would have done it.”

Perrin and Hamlin agree that agriculture offers an excellent job opportunity for returning veterans, but also for transitioning workers, including from oil and gas, and high school students interested in dual enrollment and in quickly joining a highly skilled workforce.

“If you look at the average age of our farmers, it’s about 50 years old, and each year, that age increases,” Perrin said. “So, we have aging owners with children who might not want to farm, but this is an opportunity for younger entrepreneurs to come out of a certificate program or two-year degree to run that farmer’s operation, run that business, and help localize our food supply chain in Louisiana. And with LSU, we can do it here, at home, through our own universities.”

His partner David Billings, a U.S. Army veteran and the other co-founder of Coastal Plains, agreed. He received his own master cattleman certification through the LSU AgCenter.

“We’re not buying Mexican or Midwestern beef. We’re buying the cattle you see on the side of the road on your way to the grocery store. We harvest the animals, process the beef, and keep the revenue in the state.”—David Billings, co-founder of Coastal Plains Meat Company and U.S. Army veteran

“We think very highly of higher education, but not everyone is meant for a four-year degree, and getting hands-on training makes all the difference in the world,” Billings said. “Our business is growing and we bought over a million dollars’ worth of Louisiana cattle for Louisiana consumers in the last four months. We’re not buying Mexican or Midwestern beef. We’re buying the cattle you see on the side of the road on your way to the grocery store. We harvest the animals, process the beef, and keep the revenue in the state.”

The first student to graduate with LSUE’s new Associate of Science in Agriculture degree will be Lane DeVillier in fall 2022. An avid hunter and fisherman originally from Eunice, DeVillier initially enrolled at LSUE with a broader science focus, but have since switched to agriculture as a stackable degree toward a bachelor’s in biology from LSU of Alexandria. 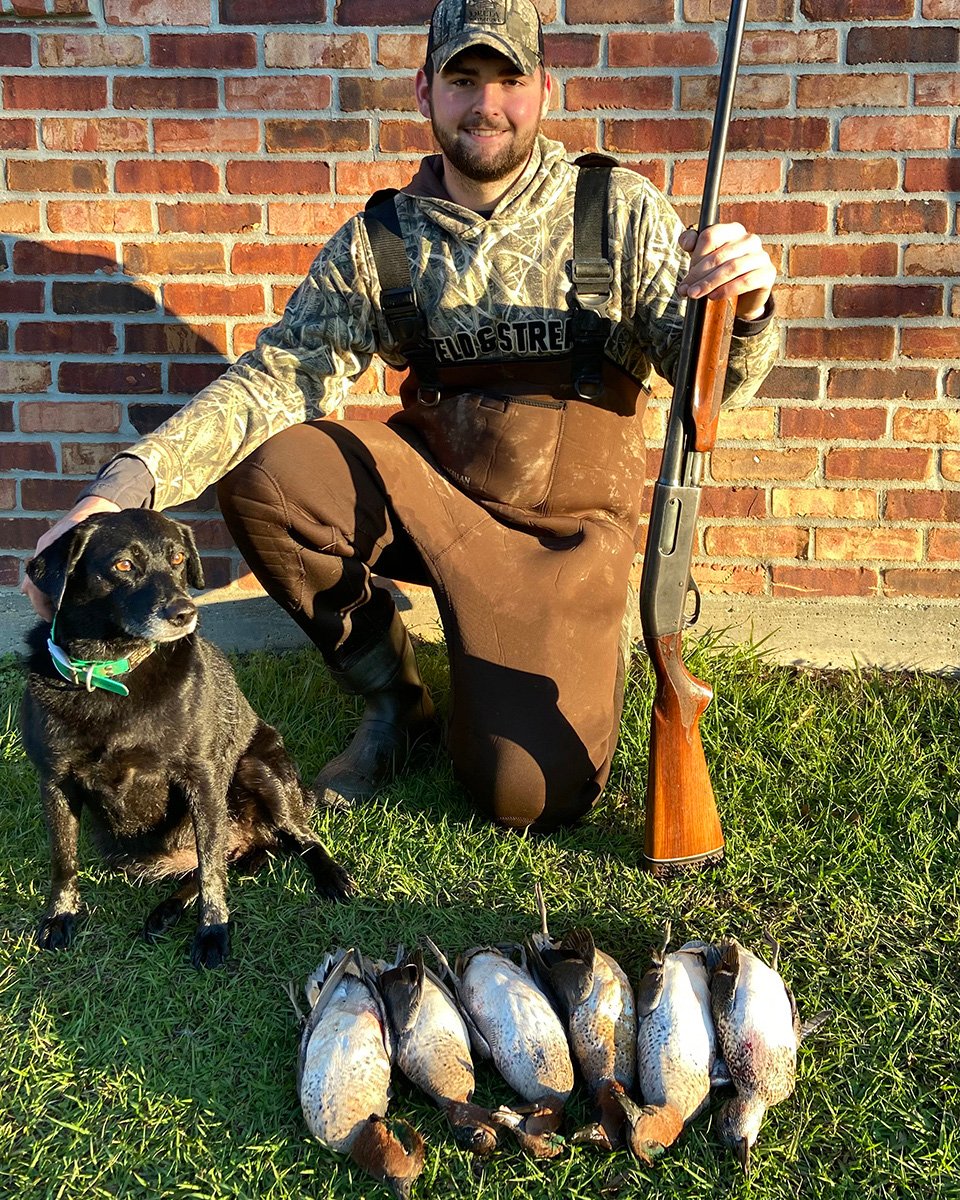 “I’d like to be a wildlife biologist and work with Louisiana Wildlife & Fisheries one day,” said DeVillier as he accidentally reeled in a turtle while fishing catfish for Lent by Bayou Courtableau last month. “I really like this new ag program, because if something goes wrong later in physics or chemistry, I will always have my ag certification and can work as a crop adjuster or consultant. I honestly wish I could have focused on agriculture from the start.”

LSUE’s agriculture focus and partnerships with nearby farms aren’t entirely new, however. Students have been able to take classes in soil science, horticulture, and more, and LSUE Professor Emeritus Malcolm Vidrine has spent decades restoring Louisiana land as traditional Cajun prairie, including for cattle grazing. Cajun prairies support biodiversity with native flora and fauna, provide more carbon credits than forest, and prevent flooding. Although “dry,” Cajun prairies are considered wetlands by the U.S. Army Corps of Engineers. Their rich soil can act as a sponge, allowing rainwater to “run on” (or in) instead of “run off.” Vidrine has also helped establish pocket prairies to prevent flooding and provide sanctuary for pollinators, including on the LSUE campus.

Together with his wife Gail, Vidrine runs Cajun Prairie Gardens outside their Eunice home as a science experiment, living museum, and prime example of prairie gardening. Their neighbors, Vernon and Justin Fuselier, father and son of Fuselier Farms, adopted their approach. They recently measured more than 15 times more carbon in their prairie soil where their cattle graze compared to the rest of their land, where they farm rice and crawfish.

“Cajun prairie can be profitable and give you both wetland mitigation credits and carbon credits.”—LSU Eunice Professor Emeritus Malcolm Vidrine

“For years, Vernon would drive by on the way to his house and see me and Gail out here, working,” Vidrine recalled. “Then, one day he stopped. ‘What the heck are you all doing?’ That’s how it started.”

“We’re used to people driving by and cussing at us, ‘Cut the damn grass!’” Vidrine continued. “People have landscape amnesia; they don’t realize this is what this area looked like, except for the last hundred years. Cajun prairie can be profitable and give you both wetland mitigation credits and carbon credits. All plants capture carbon from the air, but while trees store the carbon mostly above ground, grasses and wildflowers move the sugars, which are carbons, underground. They build massive root systems, like an underground forest.”

Justin and Vernon Fuselier of Fuselier Farms definitly did not expect the “silly little prairie grass experiment” they started two decades ago with help from Malcolm Vidrine to “change everything we do around here.” Initially, they established a few grasses and wildflowers to help with their quail, chukar, and pheasant hunting operation. Then, they added prairie for grazing.

“It makes sense, doesn’t it, to use nature’s abundance instead of using like a mining approach. While conventional agriculture tends to be extractive, regenerative and sustainable agriculture maintains healthy soils and the natural energy flow in which we can harvest from the excess side of the equation. It has transformed the legacy of our family.”—Justin Fuselier of Fuselier Farms in Eunice, Louisiana 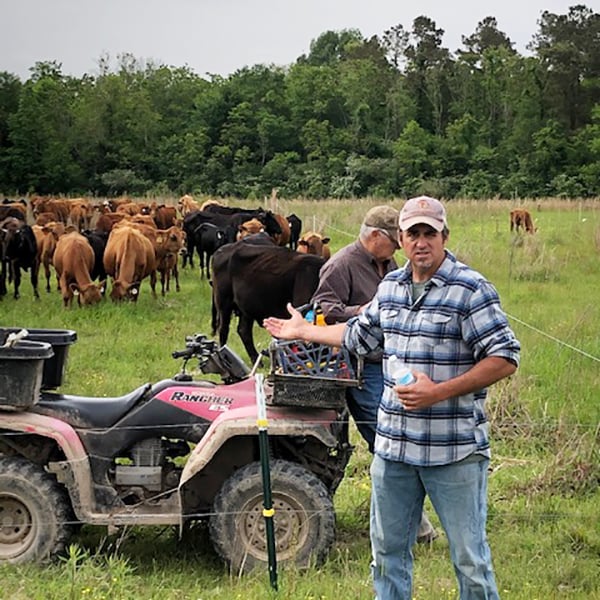 “We started small; hunted on one side, had cattle on the other,” Justin Fuselier said. “But the more we learned about natural grass lands, the more it took us on a journey. We went from a conventional mindset to a total focus on soil health, biodiversity, the best nutrition for our cattle, and native plants. That snowball never quit building.”

“We’re making a better living,” continued Justin Fuselier, who studied horticulture at LSUE before getting his bachelor’s degree at LSU College of Agriculture in Baton Rouge in 2003. “It makes sense, doesn’t it, to use nature’s abundance instead of using like a mining approach. While conventional agriculture tends to be extractive, regenerative and sustainable agriculture maintains healthy soils and the natural energy flow in which we can harvest from the excess side of the equation. It has transformed the legacy of our family.”

While restoring the Cajun prairie, Vidrine continues to teach biology at LSUE five days a week, even if he’s technically retired. His colleague, biology professor Renée Robichaux, appreciates the many inroads LSUE students now will have into agriculture careers.

“Students don’t always realize how many opportunities are out there for them,” Robichaux said. “Especially, how many different jobs and skill sets you can have in agriculture. Through our new ag degree and industry-based ag programs, student will see that we’re not educating them for the past—we really are educating them for the future.”

In the State of Louisiana, we are proud of our heritage and our community, and there’s no better...

LSU Eunice leaders hope to use a newly awarded grant to bolster the next generation of state...